Harvesting the intelligence of photosynthetic microalgae to de-carbonise future cities

Ubiquitous computing enables us to decipher the biopshere’s anthropogenic dimension. In front of our eyes, a new computational panorama appears, a mathematical landscape that we are interpreting as the biosphere’s new nature. Welcome to the Anthropocene: The time when our civilisation reached global impact.

We know this is happening because the machines that we built to measure it tell us so. In this respect, we are already in a post-anthropogenic condition, where the impact of artificial systems on the natural biosphere is indeed global, but their agency is no longer entirely human.

This paradoxical condition raises questions for the discipline of architecture and all other industries with the ability to innovate us out of our current climatic and ecological crisis. Is there a new conceptual position that enables visions of co-evolution between urban and natural systems? How can we move beyond the incommensurable dominant ideologies of nostalgia for a rural past on the one side and positivistic faith in a technocratic future on the other?

A key challenge in my opinion is to enact a paradigm shift in the conception of urban sustainability. In the Anthropocene, sustainability is the unquestioned mantra of any new project, however, its meaning must evolve within this new cultural and scientific regime where the boundaries separating architecture and the urban landscape or the city and the natural biosphere are increasingly blurred. Today, no system operates in isolation as it is inextricably part of a dense network of information, matter and energy that sustains our increasingly demanding metabolism while offsetting the fluctuations and deficiencies of the natural biosphere in providing the required levels of resources in the right place at the right time.

In the project Photo.Synth.Etica, which my company ecoLogicStudio has developed for the EIT Climate-KIC annual Climate Innovation Summit, we have introduced a new spatial metric to measure human induced climate change. Ecologic value, measured here in terms of CO2 emissions, is reframed spatially to include what economists call “externalities” towards other social and ecological systems.

This implies a network of relationships that are activated in space and time, fed by continuous exchanges between individual agents and their neighbours. So, for example, when the Printworks building emits CO2, this is captured by each of our facade’s photobioreactors and feeds the living algae cultures within them. When the sun shines, its energy is captured by the algal cells within the photobioreactors that are designed to form an urban curtain in front of the existing building. 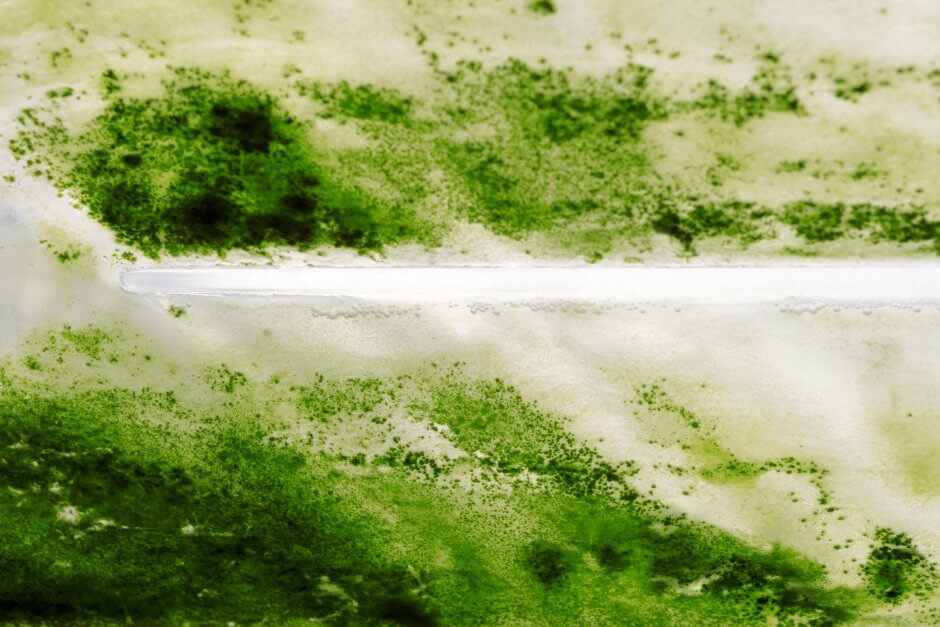 Photosyntesis is activated and oxygen produced and released at the top of each facade unit. The energy and the carbon molecules are stored in algae cells as biomass and can be released later as useful resources. In fact, the biomass can be used to produce more of the same bio-plastic that constitutes the main building material of the photobioreactors themselves. And the chain of reactions can spread in multiple directions and involve a variety of stakeholders. We can use this metric to measure the emissions of entire countries and their potential impact.

In the near future, each link in the chain will be managed by a collection of algorithmic protocols. Significantly, this implies the direct co-action in time and space of disparate systems including planning authority and active citizens but also the intelligence of other digital—as well as natural—organisms (sun, algae, carbon trading algorithms and so on). The result is an “in-human” assemblage that revolutionises the notion of urban sustainability as we know it.

This notion represents a functional evolution of architecture in the age of ubiquitous computing. It shifts the current subject-object relationship as it proposes to consider humans, intelligent bio-components and surrounding territorial systems simultaneously engaged as agents of design. It therefore sets the conceptual ground to re-evaluate the role of technological innovation in supporting the emergence of alternative models of sustainable inhabitation of the urban sphere leading to new forms of urban intelligence.

Smart cities, smart homes, autonomous vehicles, robotic factories, etc. dominate the current panorama of popular futuristic scenarios but all desperately need spatial and architectural re-framing to engender beneficial societal transitions. In other words, the anthropocentrism immanent in the mobilisation of technology in urban design limits its operative scope. This is especially true today, in a dynamic world where design problems require broader and more distributed solutions.

With our installation at the Climate Innovation Summit, we are suggesting that in the Anthropocene age, we need more than ever a non-anthropocentric mode of reasoning and deploying cutting edge technologies. Therefore, we have been testing the potential to bring, at the core of urban design novelty, the interdependence of digital and biological intelligence.

We hope that the piece will stimulate our collective sensibility at recognising patterns of reasoning across disciplines, materialities and technological regimes thus establishing progressively higher degrees of synthesis among the heterogeneous systems of the urban sphere.

Photo.Synth.Etica by Ecologic Studio will be shown at the Climate Innovation Summit, Dublin, 6-8 November 2018.

TO REGISTER FOR THE CLIMATE INNOVATION SUMMIT PLEASE CLICK HERE

Let’s tackle the carbon emissions hiding in plain sight: neutralising embodied carbon in buildings How can we leverage space innovation to take climate action on Earth? Green neighbourhoods as a service
Back to all Articles