WCEF 2019: The challenges and potentials of circular procurement in cities

Increasing population growth and urbanisation intensifies the pressure on cities globally. In addition, resources are used inefficiently in the current linear system, which makes cities largely unsustainable. Considering their high concentration of citizens and businesses, and the ability of city administrations to enact large societal transitions, cities should seize their potential as cradles and catalysts for circular change.

Two weeks ago, EIT Climate-KIC’s Circular Cities project hosted a side session on Innovative Circular Procurement in Cities at the World Circular Economy Forum (WCEF) in Helsinki, Finland. The session introduced five speakers with hands-on expertise in circular procurement and the rationale for an approach to circularity in cities.

In order to highlight the important role of public authorities in the transition to a circular economy, a white paper on circular procurement in public construction projects was launched at the session. The report was produced as part of the EIT Climate-KIC Circular Cities project and was launched by Leona Silberstein, City of Helsinki.

The City of Helsinki has pledged to integrate sustainability in 100 per cent of its procurement processes by 2020, and scaling-up already existing solutions and processes were highlighted both throughout the main WCEF conference, as well as the side session on circular procurement in cities. At the same time, implementation is not always without difficulties.

“When you do new things, you make mistakes. But we learn from them,” said Silberstein. “It is all about taking action and daring to try and learn from the mistakes and successes.”

Circular procurement will accelerate the circular transition and can thereby lead to not only creating new jobs, but also to improving circular investment and entrepreneurship, as well as the liveability and attractiveness of cities.

According to Roy Vercoulen, Founder of Circular IQ, our current resource use is a huge problem on a global scale:

“The amount of resources we take from the earth has tripled in the past years and 91 per cent of all the material we mine is wasted”.

He continued: “We need to help the right people accelerate change in the right direction, and there is huge potential in cities and governments, as procurement professionals, to act as agents for change.”

Changing the mindsets and practices of procurement is key, as cities can create demand and be the launching customer for products and services, according to Oriana Romano from OECD. Charlotte Breen, Head of Green Growth at C40, was on a similar line: “Circular procurement practices can push new innovation and green growth – if a city would demand electric buses, there will be a shift in the market and service flows.”

From vision to action

The City of Helsinki has an ambitious aim of becoming carbon neutral by 2035. According to Mira Jarkko from the City of Helsinki, the new programme offers an umbrella for the city’s circular economy activities:

“We need to take a look at our resources in a totally different way and to allocate them accordingly, in a way we’re not used to. Circular economy allows us to distribute these resources more efficiently and effectively than we have in the past.”

For the City of Helsinki, improvements in energy efficiency, investments in renewable energy and retrofitting are high on the circular economy agenda.

While cities can guide markets and service flows by implementing circular procurement practices, organisations like Circular IQ can help procurement officials actualise their circular economy visions. To date, they have helped allocate €430 million of government purchasing budgets to circular procurement in the Netherlands and Belgium.

Making goals and visions related to circular economy more tangible is important for a successful transition, as is being clear on how to measure these targets. While ambitious targets set the stage for clearer focus, they may sometimes prove unattainable for the set timeframe.

“If we don’t achieve some of our targets, we don’t want to put these under the carpet, but instead, place them on the table as our next set of goals,” said Alice Grindhammer, Co-founder and CEO of CRCLR. 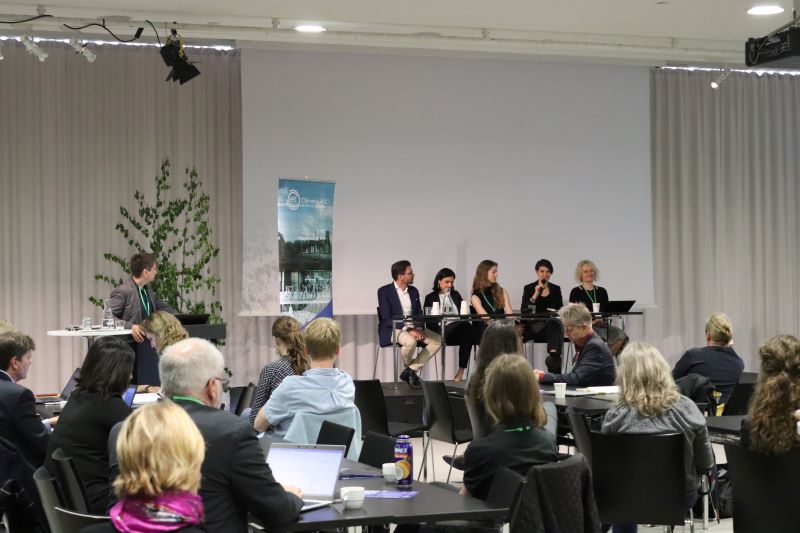 While public authorities, cities and organisations are key to transitioning towards integrated circularity practices, the public also has an important role to play. At times, however, the subject matter might be hard to grasp, which can hinder implementing circularity on a societal level simply due to the lack of knowledge.

To make the subject of circularity more tangible and approachable, Serious Games Interactive has specialised in combining learning, games and technology in digital learning experiences in order to deliver real impact.

“We need to understand the subject in a rational, emotional, physical and more tangible way. We also need to take the information and turn it into knowledge, and then turn that knowledge into behaviour. Finally, we need to turn that behaviour into real action,” said PJ Kuczynski, Creative Director at Serious Games Interactive.

As an interactive finale to the session on Circular Procurement in Cities, the audience took part in one of Serious Games’ prototype games on circularity in cities called the Mayor’s Table.

In the game, the audience became the mayor of the City of Helsinki and got a first-hand experience of what their decisions about circular topics would mean for the future of Helsinki – including its economic, social and environmental realities.

As a continuation to the WCEF collaboration, Serious Games Interactive will develop a pilot game for the Circular Cities project using the 10 bottlenecks identified in the circular procurement white paper. The pilot will be available for testing in September 2019.