EIT Climate-KIC CEO Kirsten Dunlop emphasised the importance of systemic change as cities aim to go circular—that it will connect them to one another and scale positive climate impacts globally—during the World Circular Economy Forum (WCEF) session, ‘The circular economy in cities’, last week.

The session panel, ‘Cities leading the change,’ also featured Jan Vapaavuori, Mayor, City of Helsinki, Esther Agricola, Director and spatial development and sustainability, City of Amsterdam​, and Annerieke Douma, Director for cities and regions, Circle Economy, and explored the central role cities play as engines of the global economy and their potential to drive circularity.

“The power of networks is about network effects. How do we design for the relationships between cities—between cities within the same regions or in different regions?” said Dunlop. “That leads me to the second major point, which is the principle of systems innovation. How do we create the kinds of changes we need? By orchestrating innovation in such a way that it intervenes deliberately, systematically, across boundaries… and that makes it possible to connect the cities that are learning-by-doing to one another.”

EIT Climate-KIC is uniquely positioned to leverage network effects to catalyse systemic change via its partner network of over 400 organisations, universities, startups and more—including both the City of Helsinki and the City of Amsterdam.

How can cities go fully circular?

“(Cities) can look at the relationships between innovation in energy, in mobility, in waste, in water, in food, in the design of logistics, in social innovation, economic systems—they can look at innovation across those boundaries and apply something like the circular design principle to them,” said Dunlop. 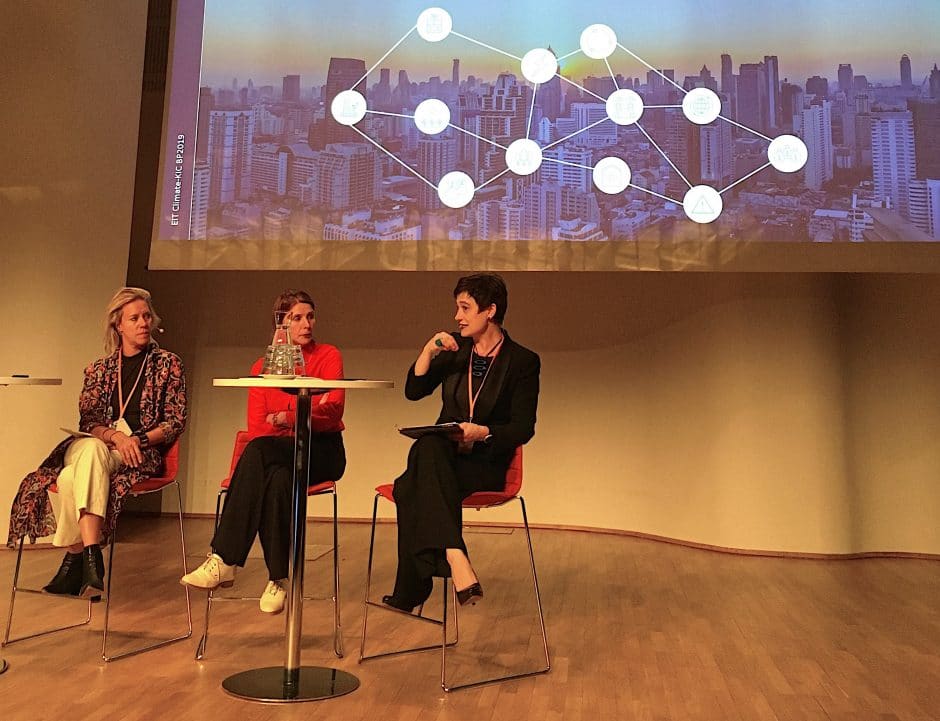 How can we enact systemic change across city borders?

Dunlop proposed using portfolio logic—thinking of the combined power of every city in Europe acting together as a massive portfolio. Every single city’s experiments in circularity, for example, could be considered in a way that allows accelerated learning from one another. EIT Climate-KIC uses an AI tool that maps the potential for these coalitions between its network members.

What is Helsinki’s vision for the future?

“I don’t think that we, Finland or Helsinki, are that good at visions. We are better at just doing things… We are good at having a holistic view, understanding that everything counts,” he replied. “Maybe the vision or programme or goal that is leading our policy the most is our aim to become carbon neutral by 2035. Of course, the circular economy plays a role in that.”

Dunlop expanded on this and described the role of cities as clients, containing the biggest concentrations of risk and of opportunity, emphasising they’re also the market makers.

“We see the city as a place and a community, instead of a bureaucracy. If you really dig deep into this way of thinking, I think that will help solve most of the problems,” concluded Vapaavuori.