Inspired by the way nature encapsulates liquids using membranes, a UK-based Climate-KIC start-up has developed an alternative to plastic bottles.

Skipping Rocks Labs, a UK based Climate-KIC startup, and their Ooho! product have been making a splash with the public being featuring in the likes of The Guardian, Refinery29, Esquire Magazine, Co.Exist, Wired Magazine and more.

Later this week they will be pitching their product at the Climate-KIC 2015 Venture Competition European semi-finals in Birmingham.

Climate-KIC’s #JourneyToParis campaign makes a virtual stop in the UK this week (26 October – 1 November), as part of the journey to the UN climate change summit COP21 in Paris. For more items in this series visit the #JourneyToParis page.

It’s well known that plastic bottles are hugely wasteful from the amount of energy that goes into producing them to the time they take to decompose. 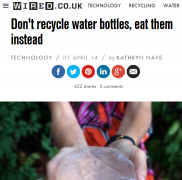 Wired Magazine has been one of the publications to feature Ooho!

Government, schools and university campuses across the world have started to ban plastic water bottles in order to reduce this waste. With the packaging being both edible and cheap — each container costs around a penny — Ooho! is a great replacement packaging. It also has the potential to be used with a variety of different products.

Ooho! was created so that once you had consumed the contents you can eat the container and not cause pollution — like with traditional bottles.

😃😃😃 Thanks to @ClimateKIC for this award! Thanks to all our coaches. Now let’s see what happens in Amsterdam tonight! pic.twitter.com/NbXxZjlgYd

After experimenting with the culinary technique of spherification with different ingredients, proportions and dimensions, a “recipe” was found to create “Ooho!” with a double gelatinous membrane in different sizes.

The technique applies sodium alginate from the brown algae and calcium chloride in a concrete proportion in order to generate a gelification on the exterior of the liquid. The final package is a simple, cheap (2ct/unit), resistant, hygienic, biodegradable and even edible water blob.