The global  Climathon event took place simultaneously in 19 cities across 6 continents including national capitals such as Beijing, Washington DC, New Delhi, Addis Ababa and London for 24 hours on 18 June 2015.

The Climathon is a global 24-hour hackathon-style climate change event organised by Climate-KIC.

Many of the globally reputed universities, research centres, government facilities and corporate offices in Africa, Asia, North and South America, Oceania and Europe partnered with Climate-KIC to host the Climathon. The event had massive support from leading climate change organisations and Universities globally. The Climate Group, Climate reality and leading Universities such as The Imperial College, London and The Indian Institute of Technology, Delhi were also key partners.

The event also witnessed participation from entrepreneurs, students and policy-makers from multidisciplinary backgrounds. The teams in each city worked towards solving problems for predefined local climate change challenges, ranging from finding ways to counter threats posed by rising sea-levels in Boston, USA to developing best solutions to improve the conservation of biodiversity in Sao Paulo.

Towards the UN’s COP21 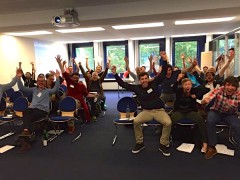 The Climate-KIC Climathon is an official partner of the former US Vice-President Al Gore’s Climate Reality Project, which runs a global series of “Road to Paris” events in 2015 under its Live Earth banner, in collaboration with the United Nations. The Climathon event helped to connect and empower citizens around the world to take direct climate action in their cities in the run up to COP21. In every city, the teams engaged and exchanged ideas on social media with participants from around the world. The best teams are chosen to move their ideas forward with coaching and support from Climate-KIC.

The winning teams are currently developing their ideas and during December 2015, their solutions will be featured prominently at the United Nations COP21 climate change conference in Paris.

“The challenge was to Improve air quality and or help people track and avoid it. Instead of progressing down the traditional path of eradicating air-pollution through data collection, we chose a simpler path based on user values. As a team we decided to try and understand what people care about in London and associate the information to Air Quality to make the issues seem more imminent and closer as a problem to people.“ said Nicholas O’Donnell-Hoare and Chris Guy from the winning team, during the London Climathon event.

Congratulations to the team behind #Pollupla – winner of the London #Climathon #airpollution #dataforchange #data https://t.co/xnumAbGMPL

“Combatting the global issue of climate change starts with simple, creative innovations at the local level, Climathon was an opportunity for D.C. to find new ways to reduce food waste and carbon emissions and protect our communities from the affects of climate change.” said Meghan Chapple Director of the Office of Sustainability at the Climathon in Washington, DC.

“The Climathon is unique because the emphasis is on coming up with an idea we can take across the finish-line and Public and Private sectors are the best way to do that through private engagement, social benefit, management expertise and innovative ideas.” Dr. John Forrer, Associate professor, GW ICR from Washington said.

The participants found that it was a fantastic well-organised event with some great inspirational judges. Additionally, Climathon had wide reach through social media promotions such as Twitter and Facebook. The mentors taught them well-rounded concepts and made them understand how they might work in the real world rather than just in the context of a 24-hour hack thereby facilitating to take forward and make some real impact.