The delegation was headed by Dr. Martial De-Paul Ikounga, Commissioner for Human Resources, Science and Technology of the African Union. 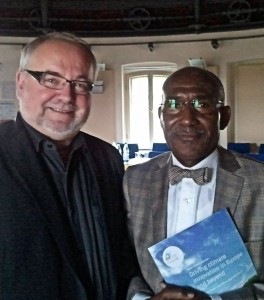 Accompanying researchers from the Institute of Water and Energy Sciences – including Climate Change – at the University of Tlemcen in Algeria were interested in learning more about Europe’s climate change research, mitigation and adaptation efforts.

At PIK, researchers in natural and social sciences from all over the world work together to study global climate change and its impacts on ecological, economic and social systems. Ingo Bräuer, Head of Science Coordination at PIK, and Fred Hattermann, Senior Scientist in PIK’s Department of Global Change and Natural Systems, provided the delegation with the latest scientific research results.

The Pan African University is an initiative of the Commission of the African Union to revitalize higher education and research in Africa. The PAU delegation visited PIK on 28 June on invitation of the German agency for international cooperation (GIZ).