Raising climate awareness through art in the Glasgow City Region

The Glasgow City Region uses arts as a means of encouraging citizens to endorse the radical transformative measures necessary to fight the climate crisis.

Ben Twist likes to open meetings with a line or two of poetry. A stanza of Seamus Heaney or Stephen Dunn, perhaps. Maybe some Robert Frost (“Two roads diverged in a wood, and I— // I took the one less travelled”). Occasionally, he reads his own work, like this topical haiku: “Coronavirus // As a river carves landscapes // Shifts society.”

A theatre director for 25 years, Ben is now director at Creative Carbon Scotland, a key delivery partner in a new project by Climate Ready Clyde, designed to transform the Glasgow City Region into a flourishing, climate-resilient place to live and work.

Launched earlier this year, the Clyde Rebuilt initiative is one of a suite of EIT Climate-KIC’s breakthrough Deep Demonstration programmes focusing on the theme of ‘Resilient Regions’. Led by Climate Ready Clyde, a government-backed alliance of 15 cross-sector organisations, the project will identify and deliver a portfolio of ‘joined-up’ innovation projects over the coming years.

Art: a door into difference

The decision to bring a leading arts organisation into the mix marks a determination from the outset to do things differently. It is telling that, of the seven core principles that underpin Clyde Rebuilt, the first is ‘More of the Same Won’t Do’. Another three, incidentally, have ‘Revolution’ in the heading (‘in understanding’, ‘in finance’, and ‘in planning’).

On multiple levels, Glasgow City Region is leading the way in terms of climate resilience and adaptation, argues Kit England, Climate Ready Clyde manager at sustainability charity, Sniffer. Yet, the pace of climate change, coupled with the tectonic shifts in the world’s socio-economic systems, is leaving communities and businesses increasingly at risk to future shocks. “Incremental approaches just aren’t working. Only a truly transformational approach will work now,” says Kit.

So why the arts? The reason cuts to the heart of what artistic and cultural expression exists to do: namely, to challenge our perspectives, to relish what is beautiful, to look at questions afresh, and to transform our way of thinking and, ultimately, behaving. 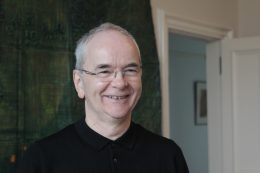 Ben from Creative Carbon Scotland gives the example of theatres in Scotland, which, over recent generations, have devoted their pre-Christmas programmes to pantomimes. The annual trip to the ‘panto’, with all the subtle (and not so subtle!) moral messaging of the genre, is now a seasonal tradition for households across the Scottish capital and nearby cities.

“Over the years, this kind of collective engagement with culture sets up shared understandings and knowledges … there’s a huge but underused opportunity to do the same today for climate change,” says Ben.

Seizing this opportunity is high on the agenda for Clyde Rebuilt, although precisely how remains to be finalised. The coming months will see the initiative’s founding partners – which also include the climate change economics and finance experts Paul Watkiss Associates and the sustainability charity Sniffer – identifying potential projects that sync with its transformation strategy, and how they might be funded and financed.

Systems Innovation: so the circle spins

Core to this strategy, or ‘Theory of Change’, is the notion of innovating at a systems level. Meaningful resilience is a multi-faceted and inter-connected phenomenon. Secure jobs in climate-resilient industries supposes investment in climate-ready technologies and businesses, which requires climate-minded financiers and entrepreneurs, who need direction from climate-conscious policymakers, who are answerable to local vote-carrying residents, and so the circle spins.

“Systems innovation isn’t easy but at EIT Climate-KIC we have developed a structured, co-design approach which we are experimenting with in various projects across Europe and which we intend to use with Clyde Rebuilt in the coming months,” says Andy Kerr, director of EIT Climate-KIC in the UK and Ireland.

As part of this initial framing exercise, however, Creative Carbon Scotland is already talking with various arts organisations working in hard-hit areas of the Glasgow City Region. From this ground-up mapping exercise, it hopes to identify resilience ‘gaps’ – be they economic, social, environmental, demographic or something else in origin – that the project could help address.

By way of example, Ben cites a workshop his organisation recently coordinated as part of a peatland restoration project in the Flow Country in the far north of Scotland. The two-day, on-site event brought together historians, archaeologists, environmentalists, scientists and local citizens. During the course of the project, an on-site workshop was held between historians, archaeologists, environmentalists, local citizens, and other interested parties.

This shared discussion not only gave rise to personal connections that would prove crucial going forward. It also offered up a fuller, more rounded picture of the area’s historical and ecological value, to which, among other outcomes, commissioned artists could then respond.

For all the urgency and scale of the resilience challenges that Clyde Rebuilt aims to tackle, taking time early on to engage and listen to local communities about their needs and aspirations is essential to long-term success, says Ben.

“We’ll use our skill and judgment, plus the contacts we have, to see what if any links exist between communities’ concerns and wider issue of climate adaptation and resilient systems. The question then is whether there’s an artist or cultural practitioner who can explore these links with their own set of skills and knowledge?” he states.

Whatever artistic interventions emerge as part of Clyde Rebuilt, all the project partners agree that they need to be ‘action-orientated’. Without a prompt to action, all the fresh thinking in the world won’t deliver the transformative changes that a City Region like Glasgow needs to see. Think Live Aid. As a song, it was mediocre; as a music-led movement for change, it was epoch-making.

Individual actions are important to building resilience, of course. But the real, macro breakthroughs come when key levers of change are targeted with strategic, collective actions. Then, the opportunities open up for whole systems – from industry or transport, to power or agriculture – to flip onto a more resilient, more climate-ready footing.

Arts and culture alone cannot deliver such an impact, which is why Clyde Rebuilt will be tackling its objective from a range of different angles. Yet, much like Scotland’s tradition of pantomimes, artistic endeavours have the power to shape new narratives and, as a consequence, influence public attitudes.

For Kit England, success in two or three years would be a significant step up in ambition, engagement and delivery of action across the Glasgow City Region, with everyone from residents to key policymakers, making inroads to delivering the radical transformative measures that effective climate resilience demands.

“There is an amazing amount already being done in the Region, but we’re still not squaring up to the challenge ahead … Success will be a society that is willing to act and when there’s alignment between businesses, government and civil society on the scale of the changes that need to be made,” he concludes.

To borrow (loosely) from Seamus Heaney, no poem has ever changed the world, but plenty have served to change opinion about what is going on within it. And, to cite him again, more directly this time: “The next move is always the test.”