Gipuzkoa, the smallest Spanish province located in the Basque Country, has embarked on a strategic collaboration with EIT Climate-KIC to lay the groundwork for a transition to a more sustainable economic, social and environmental future. The process is driven by the transformative Deep Demonstration process, which provides conditions for social experimentation and systemic innovation.

Gipuzkoa may be small, but economically and technologically it is one of the most advanced provinces in Spain, mostly due to its high manufacturing activity. The province is now setting off to become a carbon-free economy and the most inclusive society in the world.

In collaboration with EIT Climate-KIC, Gipuzkoa aims to include sustainability and adaptation to climate change in their regional development strategy Etorkizuna Eraikiz (“Building the Future”). The collaboration, endorsed by the Basque Government, also includes the Provincial Council of Gipuzkoa, the Organisation for Economic, Cooperation and Development (OECD) and a wide range of local agents.

“Tackling climate change effectively is above all about achieving social change and transformation. That is an immensely complex challenge, requiring us to learn how to work in extreme uncertainty. The territory of Gipuzkoa in the Basque Country is one of the few places in the world that understands this. EIT Climate-KIC is delighted to be partnering with the Diputacion Foral de Gipuzkoa to bridge the gap between the present and the uncertain future of climate change. We have no more time to lose everything to gain from learning how to transform ourselves through inclusive, participatory decision making, new business ecosystems and co-ownership of solutions. EIT Climate-KIC brings a European perspective to the region’s sustainability efforts, allowing Gipuzkoa to position itself in the European context and maximise its ambitions and efforts to create an exponentially different future, a future that the province can be proud of.” commented Kirsten Dunlop, CEO of EIT Climate-KIC, on the joint initiative in Gipuzkoa.

The initiative aims to transform systems through experimentation and learning – key components of the innovative Deep Demonstration methodology process. The cornerstones of the Gipuzkoa challenge are the development of economic competitiveness and social cohesion through system transformation. This objective, together with the goal of becoming the least unequal territory in Europe, will shape the institutional agenda of the Provincial Council of Gipuzkoa in this decade and is part of the Basque Government’s commitment to a greener, digital and more inclusive future.

“We started the movement (Etorkizuna Eraikiz) to raise citizen awareness and change the dynamics of how we interact with citizens. Gipuzkoa has a very strong collaborative, self-organised society. But the challenge for us now is to build a new economy in social transformation. A model to identify our next goals, design ways to achieve them, and test them out in real-world settings to draw conclusions and apply them to the rest of Gipuzkoan society: a laboratory to design and test our future now. Gipuzkoa is ambitious and we want to become the European vanguard in the field of ecological transition.” – said Markel Olano, Deputy Director General of Gipuzkoa.

EIT Climate-KIC’s collaboration with the Gipuzkoa region stems from previous mutual endeavours in the Basque Country, including another Deep Demonstration process in the Debagoiena region and cooperation with the Agirre Lehendakaria Center and the Debagoiena 2030 initiative, which includes Mondragon Corporation, known for its cooperative structure.

As part of the partnership, high-level meetings and workshops were held in September, attended by Kirsten Dunlop (EIT Climate-KIC CEO), Arantxa Tapia (Minister of Economic Development, Sustainability and Environment), Markel Olano (Deputy President of the Gipuzkoa Province) and other representatives of the Basque Government, including organisations such as the Agirre Lehendakaria Center, the Debagoiena 2030 initiative, numerous representatives of the DFG (Diputacion Foral Gipuzkoa) as well as the innovation labs of Etorkizuna Eraikiz. The meetings provided an excellent opportunity to discuss the strategic objectives of the region’s green transformation towards climate resilience and zero-carbon economy, as well as the main areas for action within the long-term process that has just begun in this ambitious Basque region. 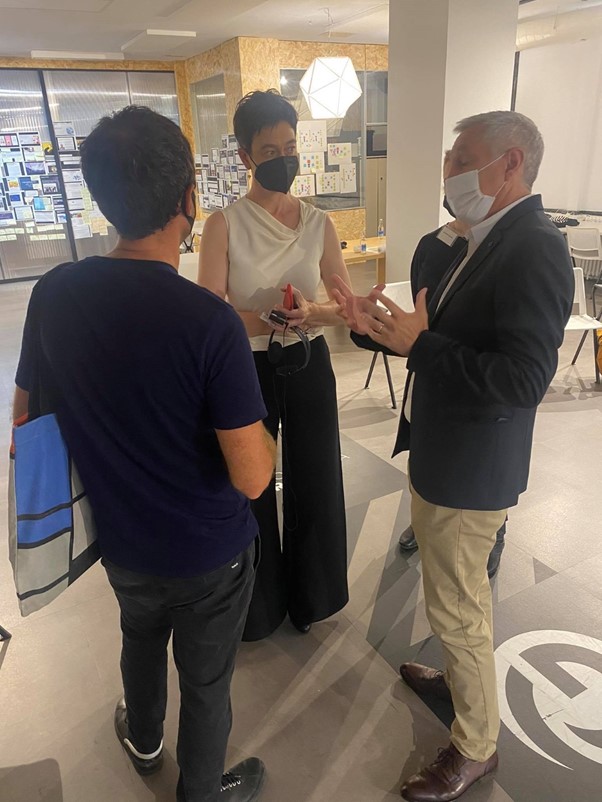 This long-term initiative in Gipuzkoa will be based on key priority areas in the region such as food systems, mobility, construction and tourism. The food systems sector is of great importance as it is transversal and includes a wide range of components, is deeply rooted in the local identity and also has a high density of star restaurants.

But the automotive industry also accounts for a large share of jobs in the region. “56% of all automotive components manufactured in Spain come from Basque Country, mobility itself drives around 40% of Gipuzkoa’s GDP,” noted Arantxa Tapia, Minister for Economic Development, Sustainability and Environment of Basque Government.

Finally, the construction sector plays an important role in the context of the rehabilitation of old buildings, the decentralisation of energy production and new building materials (green steel and the reintroduction of wood in the construction sector). Tourism is also important from the point of view of internationalisation and the Gipuzkoa’s ambition to become an even more hospitable society.

The Basque Government has proposed its own roadmap to meet the European Green Deal objectives – the Basque Green Deal – that includes objectives to reduce emissions and switch to renewables within the concept of a new economic model, with industry and technology as the main levers. Science, technology, circular economy, energy transition and the food value chain are all aligned with the same objective: a just and sustainable transition. Thus, the Deep Demonstration directly contributes to these goals, supporting the province in its aim to “strive for a more sustainable future that leaves no one behind.” said Minister of Economic Development, Sustainability and Environment, Arantxa Tapia.

Moldova is one of Europe’s most modest contributors to...