Supported by the EIT Community, the New European Bauhaus Ideation Awards winners were announced on 30 March, 2022. Solutions to New European Bauhaus challenges—green transition through architectural, cultural and historic sites, circularity and urban resilience, and affordability and accessibility to all—were put forward by 27 applications. Three among them won the Jury Award and one won the Audience Award. Two Special Mentions of Honour were also given.

The proposals came from a diversity of places. There was one application from Croatia, Greece, Hungary, India, Italy, Latvia, Peru, Romania, Slovenia and Turkey respectively. Estonia, Kenya and Switzerland had two applications each. There were three applications from Finland, while four were submitted from Germany and Spain respectively.

The Jury Award winners were from Italy, Germany and Estonia.

“The EIT Community shines in bringing together the brightest innovators from all corners of our continent to create new ideas that turn challenges into solutions and transformation. The New European Bauhaus is built on the belief that the spaces and place we cherish need to be sustainable, beautiful, inclusive and a force to bring us together. I congratulate the finalists in dreaming to achieve this and I can’t wait to see their innovations further come to life with the support of the EIT.” 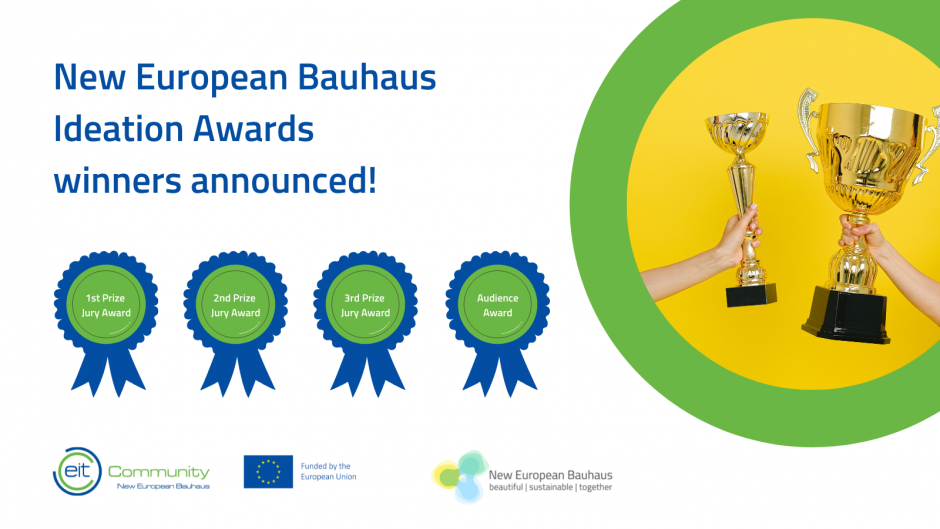 The First Prize of €3,000 plus travel and accommodation to attend the New European Bauhaus Ideation Awards Ceremony was awarded to Jebbia, a solution created with reused materials to rethink urban landscapes. It’s a weather-proof and modular green cover that protects and hides urban technical infrastructure, creating positive impact for the user and the community by preserving urban heritage and landscapes, increase green areas in cities, and absorbing CO2, among other things.

The Second Prize of €2,000 plus travel and accommodation to attend the New European Bauhaus Ideation Awards Ceremony was awarded to TurtleApp, the solution to promote second hand clothing in an attractive and convenient way. The modern and user-friendly app consolidates all the possible second-hand options available in one’s proximity, prioritising consumer needs instead of pushing them to buy more, while making use of digital technology to match the right products to the right consumers. All of this can be localised, bringing together consumers, city initiatives, shops and digital platforms with relevant items located within 25 kilometres.

The Third Prize of €1,000 plus travel and accommodation to attend the New European Bauhaus Ideation Awards Ceremony was awarded to WasteLocker, which aims to tag batches of waste at the source and to make their reuse, recycling or recovery simpler, traceable and certifiable in real-time. The project will remove bottlenecks in the waste stream and give feedback. Only around 30 per cent of waste is recycled at the moment in Estonia, which is why the team has discussed the possibility of pilot projects with support from the cities of Tallinn and Tartu, Cleantech Estonia and contacts across the value chain.

The Audience Award of €1,000 plus travel and accommodation to attend the New European Bauhaus Ideation Awards Ceremony was awarded to Re-monda, a circular solution to manufacture highly-demanded biodegradable materials in a context of plastic crisis worldwide. Re-monda seeks to turn oranges into bioplastic, re-valuing organic waste while reducing the environmental impact of the whole city. This is possible thanks to the presence of valuable polysaccharides such as pectin, cellulose and hemicellulose in the orange peel. The proposal was born in Climathon Sevilla 2021, with the goal of implementing it in eCitySevilla, a carbon-neutral project in Cartuja island for 2025.

An Honourable Mention goes to Food for the Earth and Re-monda.

Food for the Earth is a community-based initiative for composting on-site. It empowers local communities and promotes climate-friendly behaviour and ways to live. Food for Earth’s main goal is to create, adapt, transfer knowledge and raise awareness among citizens and municipalities about soil’s health in urban and periurban areas. It addresses specific social groups, such as families, youngsters or children seeking climate friendly behaviour.

Also, winners will be able to enjoy the different sessions of the New European Bauhaus Festival, including side-events, the Fair and the Forum. It will be a fantastic opportunity for stakeholders to meet, explore synergies and create partnerships.