Mary Ritter, Climate-KIC’s Chief Executive Officer, was presented with an OBE by Prince Charles at Buckingham Palace this week (12 February 2014).

“I am highly honoured and absolutely thrilled,” said Mary Ritter. “While the OBE is a personal award, it is also a recognition of all those who have worked with me throughout my scientific research career, especially my colleagues in Climate-KIC, and who made it all possible.” 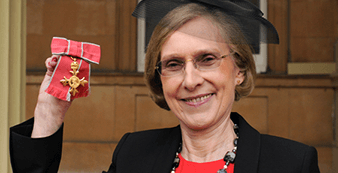 “It is a great honour to be recognised for my contribution, alongside that of the whole Climate-KIC team, to one of the major challenges facing mankind,” Ritter said.

The long-planned ceremony coincided with one of the worst storms to hit the UK so far this winter, which has caused large areas of England and Wales to be flooded and has put tens of thousands of homes without power.

“My thoughts go out to the people dealing with the dreadful effects of the extreme weather across the UK today,” Ritter said, “The recent series of extreme weather situations highlight the need for us to work on innovations to adapt to a changing climate and to militate against further climate change.”

In the three years that Mary Ritter has been at the helm, Climate-KIC’s public-private partnership has grown from a membership of 15 organisations with a €6 million budget, to a community of over 200 partners across Europe from business, academia and the public sector, with a budget of more than €70 million for 2014 and a mission to mitigate and adapt to climate change while creating sustainable growth and jobs.

“The citation is for ‘Services to Scientific Research and Innovation’ and in the context of innovation, although I have been a serial entrepreneur within the academic context, I am particularly proud of my most recent, and biggest, challenge – leading Climate-KIC,” said Ritter.

Before joining Climate-KIC, Professor Ritter’s research focused on how the immune system develops in the fetus and how it declines in elderly people. She also developed new research products, and established new postgraduate programmes at Imperial College London.

Professor Ritter launched the College’s first Graduate School and played a key role in the establishment of the joint Imperial-NTU Lee Kong Chian medical school in Singapore. As Pro-Rector, she oversaw Postgraduate Affairs at Imperial from 2004 to 2007 and International Affairs from 2005 to 2011.