Climate-KIC and the Lower Silesia region in Poland will coordinate their multi-million Euro investment programmes to support the transition to a low-carbon economy. 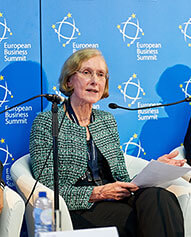 “A key aspect of the action required to address the challenges of climate change is to join forces and pioneer new investment alliances,” said Mary Ritter, Climate-KIC’s Chief Executive Officer.

“A significant amount of this investment is made at the sub-national level across Europe. I’m very pleased that we are leading the way in forging collaborations such as this one with the Lower Silesia region in Poland,” Ritter said.

Both parties will be making substantial investments in the period running up to 2020. The Lower Silesia region is proposing to spend more than €600 million of its European Structural and Investment (ESI) funds to support its regional low-carbon economy over the next seven years.

Climate-KIC will be investing around €400 million annually to support its pan-European activities during the same period.

Climate-KIC will fund a dedicated project team of specialists from across its partner community to act as a bridge for developing shared ideas and joint actions with the Lower Silesia region. Lower Silesia is one of six European regions active within the larger Climate-KIC community.

Climate-KIC Regions director Aled Thomas said: “Both Climate-KIC and Lower Silesia will be investing significant amounts of public and private funding in the low-carbon economy up to 2020 and beyond. We are committed to working together to explore and share new ideas on the most effective and efficient ways of supporting the transition to a more sustainable economy.”

“If successful, our goal is to develop similar collaborative arrangements with other regions in Europe and across the world,” said Thomas.

Visit our newsroom for the press release.

For cities to become climate-resilient, they need to invest in capability building EIT Climate-KIC signs declaration ‘EU Green Deal: from local to global’ EIT Climate-KIC organises first Festival of Circular Economy and Bioeconomy in Santander
Back to all Articles