It’s not just national governments attending the UN climate change summit in Paris. Many state and regional leaders are present as well, and often push for more radical action than their national counterparts.

Canada may be one of the most prolific participants in that sense, with prime minister Justin Trudeau bringing representatives of Canadian provinces and territories — as well as national opposition leaders — to COP21, saying “We’re all in this together.”

‘Sub-national’ Canadian governments such as Ontario and Quebec are among the most active participants in a new Climate-KIC supported initiative, the Compact of States and Regions, which also includes European regions such as Scotland and the Valencian Region in Spain — as well as South Australia, where Climate-KIC is working on setting up a South Pacific Climate-KIC partnership.

Launched in September 2014 in New York, with UN backing, the Compact tracks and reports progress by participating governments. It currently has the support of 44 states and regions together representing 325 million people and over US$10.5 trillion in GDP – one eighth of the global economy.

To fight climate change, we’re all in this together. Canada is back. #COP21 pic.twitter.com/atvk3L09C8

This morning at COP21 (7 December), the initiative unveiled its first disclosure report, announcing targets that will result in cumulative emission reductions of 12.4 gigatonnes of ‘equivalent carbon dioxide’ by 2030 – more than the combined greenhouse gas emissions of the US and EU, and greater than China’s emissions in 2012. It would amount to 47.4 gigatonnes by 2050 – equal to the total world greenhouse gas emissions in 2012.

In addition to these cumulative emissions savings, by 2050 Compact governments from both developed and developing nations will have reduced their collective emissions by almost 55% in absolute terms. The report also revealed both near and long term goals, with almost half of reporting governments having already set 2050 goals. A majority of these aim for reductions of more than 70% below base-year emissions. 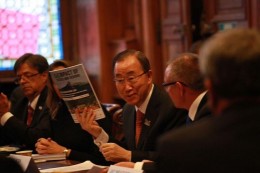 United Nations Secretary-General Ban Ki-moon being presented with an advance copy of the Compact of States and Regions ‘Disclosure Report’ by Premier Jay Weatherill of South Australia, at COP21 in Paris.

Speaking on the report at COP21, the Secretary-General said: “The actions of state and regional governments are essential for achieving the new 2030 sustainable development agenda. They are close to their citizens and are uniquely placed to work with national and local governments to amplify the efforts that are needed to reduce emissions and build climate resilience.”

Speaking alongside the Secretary-General in Paris, Premier Jay Weatherill of South Australia said: “Leadership from state and regional governments is needed now more than ever. We know the national climate plans submitted ahead of the Paris talks – the Intended Nationally Determined Contributions (INDCs) – are not sufficient to limit global temperature rise to below two degrees Celsius. But states, provinces and regions can support this global effort by raising our own levels of ambition.”

“We have already been at the forefront of climate leadership for many years, setting ambitious climate and clean energy targets, and developing new and innovative policy responses. If we are already having this impact with 44 reporting governments, imagine what we can do with more,” she said. 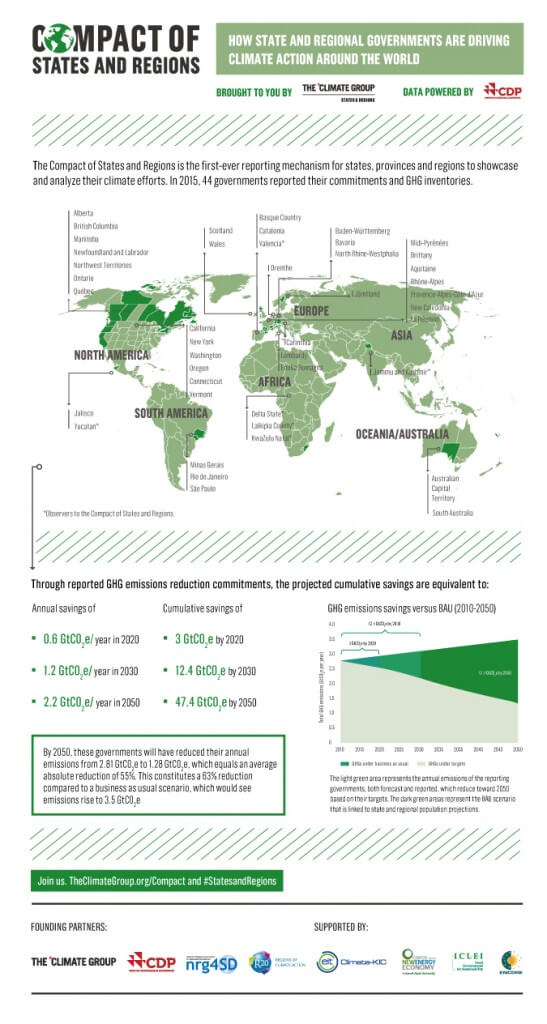 Partnership with the Compact of Mayors

The Compact commitments are also included in the Non-state Actor Zone for Climate Action (NAZCA) platform, the online tool developed by the United Nations with the governments of France and Peru for COP21. Through NAZCA, businesses, cities, regions and investors have already showcased over 10,000 climate initiatives.

In January, the Compact of States and Regions will also formally start a partnership with the Compact of Mayors – a similar initiative working with mayors and city officials. The partnership, announced at this year’s Climate Week NYC, will further incentivize cities, states and regions to continue their commitment to ambitious climate targets, transparency and progress.

The figures in today’s announcement are based on climate data reported by 44 sub-national governments across 18 countries and 6 continents. For a full list of governments who have submitted data, and to see our visual explaining the results, click here.

As a critical part of the post-Paris agenda of action by Non-State Actors, all state and regional governments are invited to join the Compact and begin reporting in 2016.

The Compact of States and Regions is a partnership between The Climate Group, CDP, R20 and nrg4SD, supported by the UN, Climate-KIC, Center for the New Energy Economy (CNEE), ICLEI and ENCORE.