SolarisKit is a certified B Corp based in Dundee, Scotland, and was founded in early 2019 by CEO Faisal Ghani. In August of 2019, SolarisKit was part of EIT Climate-KIC’s Accelerator programme in Scotland in partnership with the Edinburgh Climate Change Institute (ECCI).

“I came up with the idea while in a very sleep deprived state as a new dad. I actually remember this moment because it was a turning point in my life,” said Ghani. “At the time, I was an academic at Heriot-Watt University—a lecturer in renewable energy engineering. I was reading a paper and it stated that households in Kigali, Rwanda, are forced to spend up to 40 per cent of their income on energy and 70 per cent of that went to heating. I was taken aback by this statistic. Turning sunlight into heat isn’t that difficult, and if we were able to do this on a large scale, it would have a huge impact on the environment and on people’s quality of life.”

With nearly 50 per cent of global energy consumed to generate heat, there is a large opportunity for renewable and energy efficient solutions such as solar hot water collectors to address demand. What makes SolarisKit uniquely positioned to respond to the needs of a global consumer base, however, is its compatibility with diverse climates and infrastructure.

“The reason why solar hasn’t penetrated African, Central American or Southeast Asian markets is because the solutions available have been primarily developed for the needs of wealthy, industrialised places like Europe,” said Ghani. “They’re over-engineered for a sunny and warm climate like Africa, so you’re just paying for a lot of technology you don’t need.”

He continued: “If you bring those solar water heaters into Africa, they can reach dangerous temperatures and they’re fragile and difficult to manufacture locally. What we at SolarisKit also found was that people were still using plastic piping to connect to those European solar hot water collectors and the piping would get to a high temperature such that it could be destroyed. Fixing the system would also be a huge cost.”

The SolarisKit S400 was designed with these challenges in mind. It is a flat-pack and can therefore be easily transported, for example, via a cargo bike. Moreover, it comes with instructions and can be assembled in about 20 minutes without any tools and connects to a home’s hot water tank via a pump. Whereas in the UK, for example, a solar water heater installer might charge an extra £1,000 to £2,000.

The concept of empowerment has driven many of SolarisKit’s business decisions, from its affordability to its simple assembly to its repairability. Not to mention the solar hot water collector’s ability to contribute to mitigating climate change, enabling users to directly tackle the climate emergency with their own two hands. 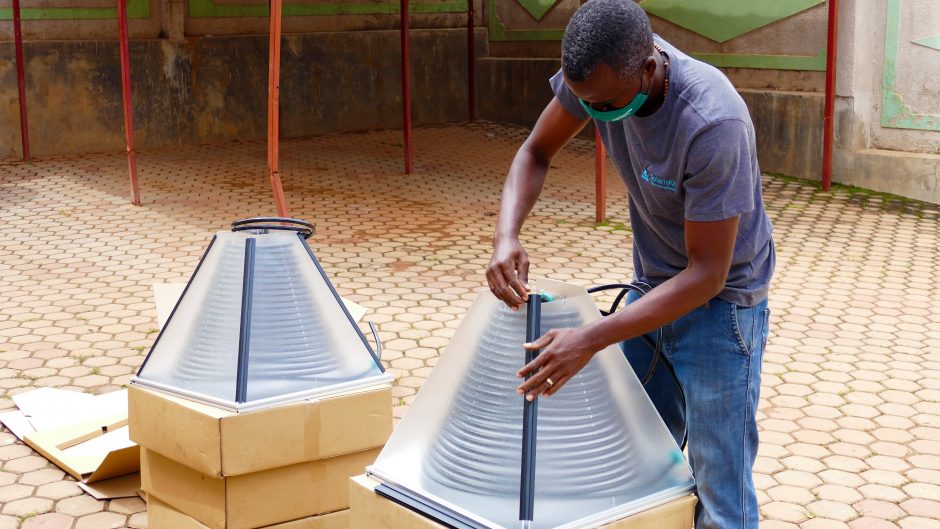 The solar water heater was also engineered to be safe, heating water up to 70 degrees Celsius, which is hot enough to kill bacteria but not hot enough to damage piping.

“One of the key benefits is that it can be installed on a flat surface and flat roofs are very common in Africa,” said Ghani. “Current solar hot water collectors are designed for Europe and need to be pitched at a certain angle, so there’s all this extra hardware. They also need to face the equator and therefore risk being installed incorrectly. SolarisKit S400 removes that risk as it can passively track the sun due to its prismatic shape.”

While the SolarisKit team were installing solar water heaters in Rwanda, they estimated that about 70 per cent or more of the housing was incompatible with a solar hot water collector because they lack a hot water and a cold water pipe and/or they don’t have roofs that can withstand the weight of the device. The team also found that every single household they visited used charcoal to heat water.

“The price of charcoal has been going up. And it’s very inconvenient: It takes an hour to heat the water and you have to mix it with cold water and transport it,” said Ghani. “Also, it’s obviously a very dirty energy source. Kigali actually consumes 60,025 kilos of charcoal per week and that’s just for heating water and for cooking.”

He continued: “So what we’ve done—and we’re very excited about this—is we’ve developed a completely self-assembled solar water heater that doesn’t require a pump, electricity or need to be put on the roof,” said Ghani. “You just build it and put it in the backyard or somewhere sunny. Then you get your jerrycan, fill the solar hot water collector up manually, walk away, and at the end of the day you get a tank of hot water you can access through the tap.”

SolarisKit is planning to launch this product in May 2022. So far, a B Corp housing developer in Kenya, BuildX, is purchasing 18 of these next generation solar water heaters for a housing project. A couple of systems will be sent to South Africa as well.

However, supply chain disruptions and increases in material and shipping costs due to the pandemic and the Russian invasion of Ukraine have stymied SolarisKit’s efforts in the price-sensitive markets of the Global South. This has forced the company to pivot its market focus towards Europe and the UK for the time being, with hopes that these variables will stabilise again in the next 12 to 24 months.

Ghani has noticed an increasing demand for the kits in the UK in particular because of growing gas prices. And within this market, customers are also looking to use the solar hot water collector outside of the home such as while camping or glamping, or in stables to wash horses.

The activity in the UK might act as a bridge towards the Global South: SolarisKit has developed a partnership with an Edinburgh-based glamping company and are looking into price models so that, when one of their customers buys a kit, one can be donated to Africa. Another idea Ghani has to increase SolarKit’s activity in the Global South is licensing the solar water heater, enabling it to be manufactured and sold locally thereby also creating jobs. He is currently looking into this for South Africa and India. Licensing is also a step Ghani feels is inevitable and necessary for reaching SolarisKit’s ambitious vision, which is to deploy 500 million solar collectors, equating to potentially saving 100 megatonnes of carbon per year.

In the meantime, SolarisKit is planning to raise another investment round in the next six months to grow its team and expand its manufacturing capacity. It will also further invest in research and development to keep innovating on solar water heating:

“Innovation for me means developing something that is simple and practical and is going to make someone’s life or the environment better. You take a complicated problem and you distill it into a simple solution and I think that’s where the impact lies,” said Ghani.

Solar thermal energy: An industry with untapped potential Panel envisions what a long-termist economy could look like and how to get there Boosting resilience through climate risk information
Back to all Articles