When we think about the energy transition, the first images that come to mind might be of roofs covered with solar PV panels, a windfarm – either on land or in the sea – or maybe even electric vehicles. But one technology is often overlooked and underfunded: solar thermal, which is used for harnessing solar energy to generate heat for use in industry, and in the residential and commercial sectors. At a time when the EU is planning to make Europe independent from Russian fossil fuels before 2030, experts in solar thermal energy emphasise the importance of including this technology into the energy mix.

Following the invasion of Ukraine, the case for a rapid, clean energy transition has never been stronger and clearer. The EU imports 90 per cent of its gas consumption, with Russia providing around 45 per cent of those imports in varying levels across Member States. The EU initiative REPowerEU will seek to diversify gas supplies, accelerate the green transition and replace gas in heating and power generation.

Heat accounts for over half of energy demand globally. In the words of Christophe Williams, co-founder and CEO of Naked Energy: “If you are serious about decarbonisation, you must tackle heat.”

Naked Energy’s team of engineers, scientists and innovators have developed two core products: a solar thermal collector that heats water from the power of the sun to up to 120 °C, and a hybrid solar thermal and solar photovoltaic collector that reaches hot water temperatures of 100 °C and generates electricity. Distributed and renewable heating systems, such as solar thermal and solar PVT, provide reliable, affordable and resilient energy infrastructure. For Williams, this technology is key to a fair transition to net-zero carbon. 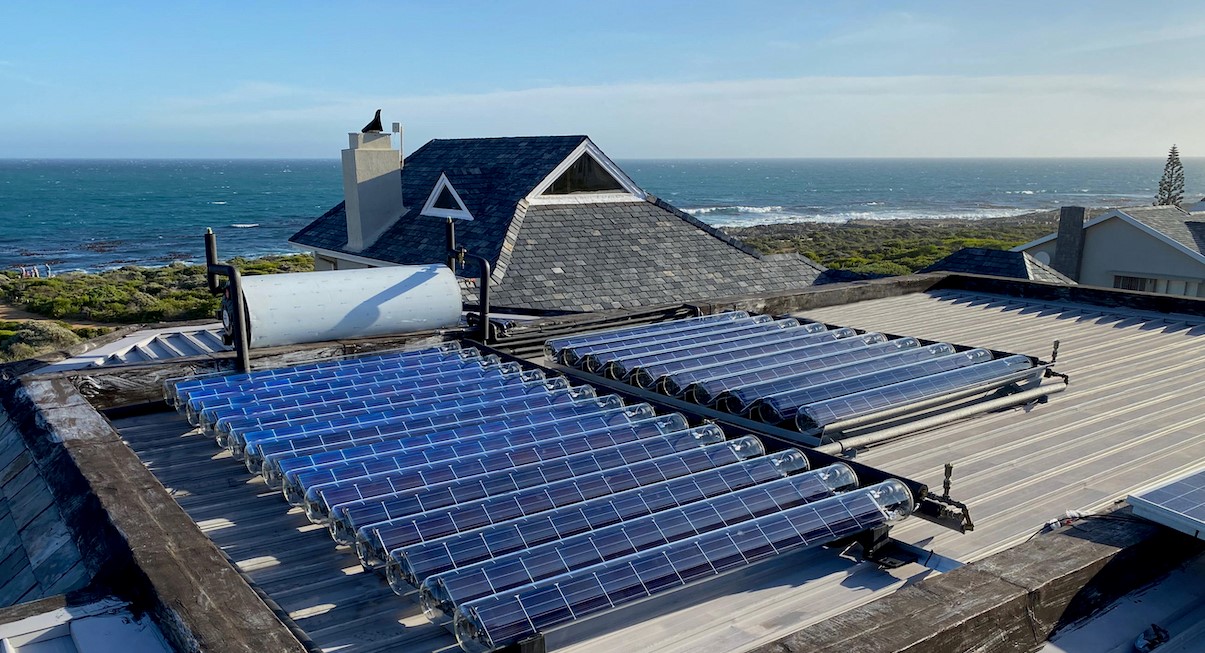 A long-standing partnership with EIT Climate-KIC

Naked Energy was one of the first start-ups to graduate from EIT Climate-KIC’s Accelerator and has been an active member of the community ever since.

“It’s been a long journey to get to where we are today. At that time, we thought EIT Climate-KIC would be a great organisation to join because it’s a diverse ecosystem, and it proved correct,” says Williams.

We joined EIT competitions and pitching events in Budapest and Brussels, received grant funding to do some early field trials and were introduced to some of our early corporate customers. The fact that an organisation like EIT Climate-KIC was taking what we were doing seriously helped us to get investment as well

Since then, Naked Energy has raised nearly £14 million in funding between private investment and grant funding. In fact, it was the first start-up that EIT Climate-KIC invested in, and the organisation is still a shareholder. Naked Energy now counts 18 employees and already provides solar heat systems to hotels, hospitals, care homes and the manufacturing industry in Switzerland, the Netherlands, Kenya, the UK and South Africa.

The best of both worlds

Their first product, VirtuPVT, generates both solar heat and power. It first converts 60 per cent of the sun’s energy as heat and converts an additional 20 per cent into electricity thanks to monocrystalline photovoltaic cells bonded to the absorber.

The product’s design makes it easier and cheaper to install and maintain: Each tube comes with its own individual mounting system and is angled towards the sun and spaced to avoid self-shading in the winter. To complete the installation, the array is simply connected to existing electrical and plumbing systems. 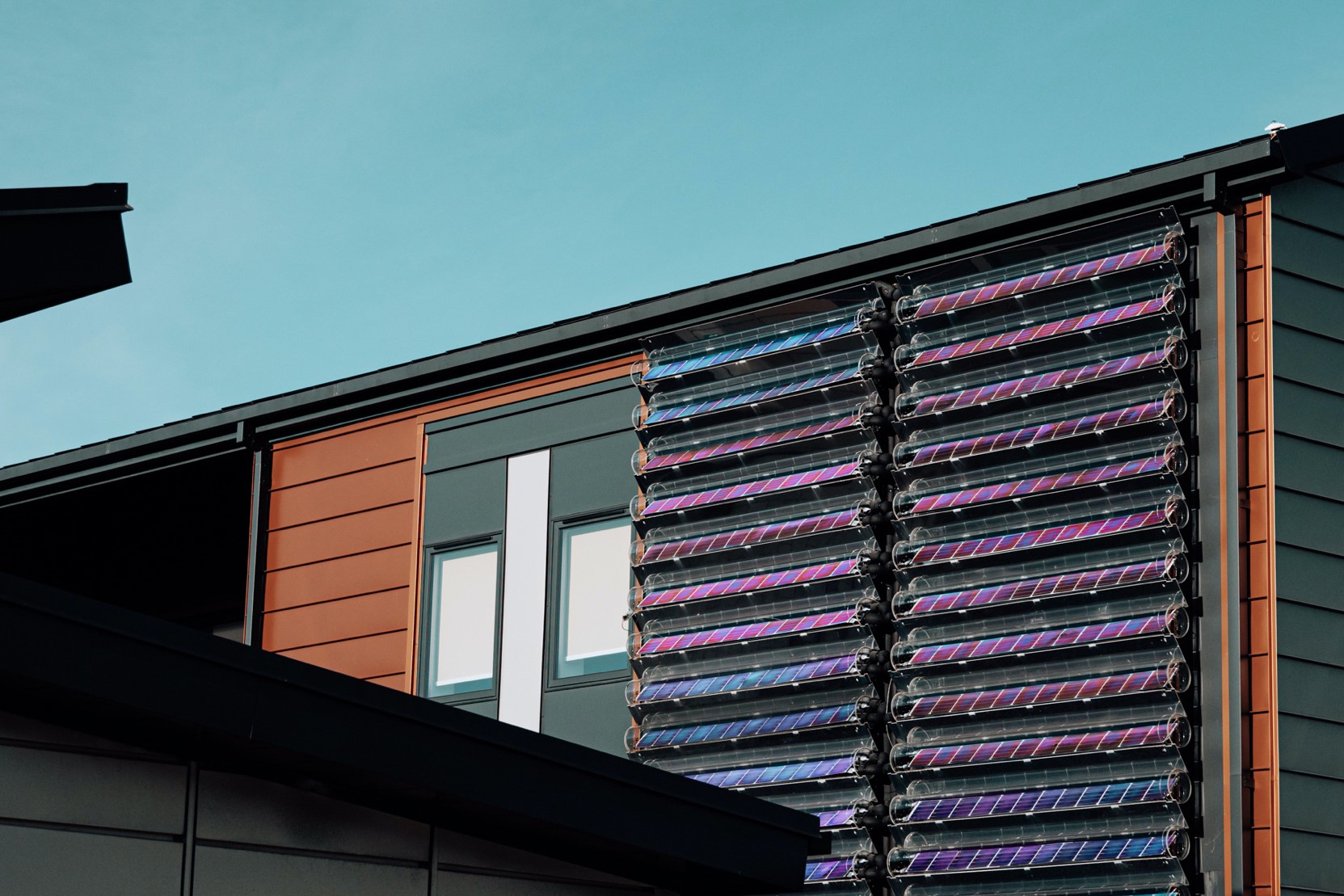 A cost-efficient alternative to the electrification of heat

Unlike electricity, heat can’t be transported easily, and can only be generated locally. Solar thermal therefore provides a more efficient, high density means of providing zero carbon heat, presenting a cost-effective alternative to the electrification of heat.

“Thermal energy is collected and stored in warmer months and can be used throughout the year and in the opposing season when it is needed most,” explains Williams. “The technology also relieves the increasing burden being placed on the electricity grid as the world electrifies transport and moves away from gas.”

In 2019, an array of 40 VirtuPVT tubes was installed on the south facing façade of the Swansea University’s Active Office, the UK’s first energy positive office, designed to generate more energy than it uses each year. This was the first large-scale commercial installation of VirtuPVT, which is integrated with thermal and electrical storage systems in the building. During the first year of operation, Naked Energy‘s technology avoided CO2 emissions equivalent to 722kg (Scope 1) and 472kg (Scope 2), had traditional forms of heat and electricity generation, respectively, been used.

That same year, Naked Energy installed 60 VirtuHOT tubes on the University of Westminster, generating 24 MWh of thermal energy per year, which provides hot water to a student accommodation block to reduce natural gas consumption. Following the success of the installation, the University of Westminster installed a second, 135 tube array of both VirtuHOT and VirtuPVT on another accommodation block, which provides both heat and power to the resident students.

Currently, Naked Energy is commissioning pioneering projects from UK cultural landmarks to a range of projects across Europe providing domestic hot water, space heating and electricity for a variety of applications.

The solar thermal industry is expected to grow to $36 billion globally by 2026. According to the International Energy Agency, solar thermal and geothermal will meet 75 per cent of all heat demand by 2050. For Williams, the industry has a big role to play in the whole transformation that is needed to reach net-zero carbon by 2050. With its innovative and proprietary technology and a growing number of business partners, Naked Energy is well positioned to capitalise on the growing demand for alternative heat sources.