LOCATION
Palace on the Isle, Łazienki Królewskie in Warsaw, Poland
DATE
17 June 2021 from 8:45 to 18:45 CET
REGISTER FOR THIS EVENT

The Paris Polish Forum is an annual, non-partisan conference reuniting Polish students and young professionals living in France, as well as French students interested in the CEE region.

The conference is organised by the Association des Polonais de Sciences Po that aims to promote Polish-French cooperation and strengthen the ties between the two countries. It is a unique platform for discussion, reuniting more than 150 students and connecting them to the representatives of major financial and business entities shaping the future of Polish and French economies.

The event will be attended by Michał Kurtyka, the Minister of Climate and Environment, Poland, H.E. Frédéric Billet Ambassador of France to Poland and H.E. Tomasz Młynarski Ambassador of Poland to France. The climate panel “The Central Role of Climate Policy in the Calculus of Modern Governance” will be attended by Anna Brussa, Teams Orchestrator Deep Demonstration, Just Transformations, EIT Climate-KIC. 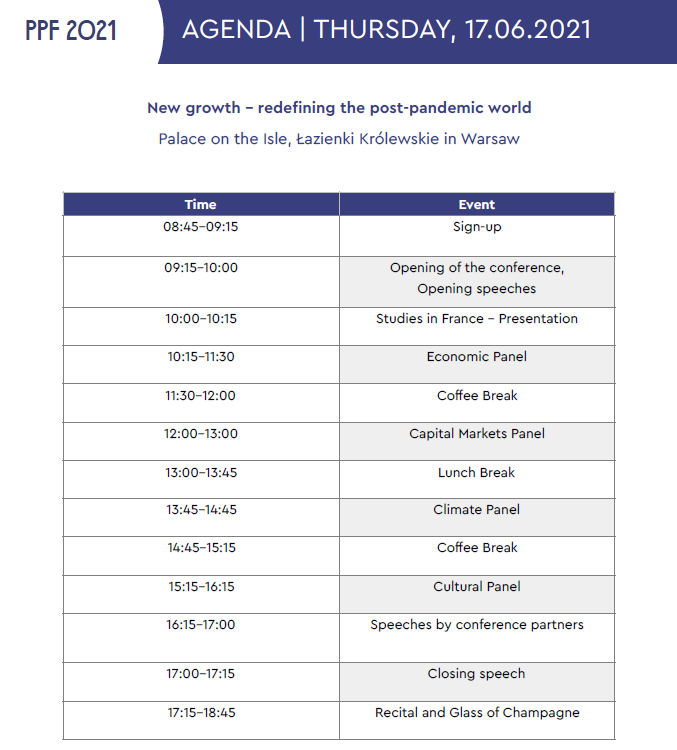 Following the outbreak of the Covid-19 pandemic, policymakers faced the trade-off between safeguarding the health of the population and freezing many sectors of the economy. In most of the advanced economies, the choice was clear. A fiscal stimulus of more than 12% of global GDP was launched to allow compensation for numerous measures preventing the spread of coronavirus. As we start to emerge from the pandemic, States face record-high debt. Many economists fear the consequences, which are yet to be fully understood and described. Excess liquidity in the markets and their excessive reliance on the public sector in recent years raises the question of whether the situation will ever return to what has traditionally been considered the norm regarding public sector participation in the economy, or whether this will be the new set of rules to define economic life for decades to come?

Capital markets panel: Development of the capital market in Poland – key challenges and directions. Opportunities for a Polish unicorn in the world of low interest rates.

Climate panel: The Central Role of Climate Policy in the Calculus of Modern Governance.

Energy is one of the main powerhouses of civilisation. The triad of coal, gas and oil has determined the shape of the world as we know it today – the universal access to energy has made it possible to popularise transportation, heat homes, and establish factories, schools and hospitals, thus determining space design in modern cities. Fossil fuels have also for long been one of the main drivers of international trade and determinants of geopolitical rivalry, best exemplified by the oil crisis of 1973. In recent years, the number of countries that have declared climate neutrality by 2050 has reached more than 130, including the US, EU, or Japan. The world is moving towards a low-emission economy at a significant pace. This is why the implications of climate policies are no longer limited to the energy sector itself but start to claim a central place in the calculus of governance worldwide.

The conference will be held in English with some selected panels held in both French and English with simultaneous translation provided.