The event will be held in English.

Attendance in person is free but registration is required as seating is limited. Therefore, in-person participation will be decided on a first-come, first-serve basis. RSVP: https://forms.office.com/r/7sjy951Uks. Streaming will be available in case you prefer to follow online.

Please share this invitation widely with your colleagues, networks and followers. We are looking forward to welcoming you and sharing a New European Bauhaus experience! 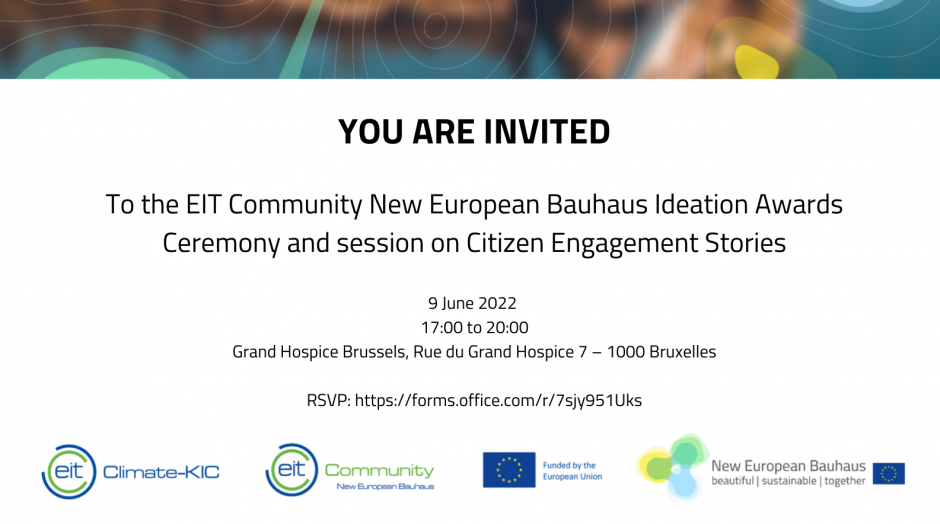 Solutions including green transition through architectural, cultural and historic sites, circularity and urban resilience, and affordability and accessibility to all were put forward by diverse contenders. Three among them won the Jury Awards and one won the Audience Award. The winners were announced on 30 March 2022.

The “Best of Bests” will receive a prize of €10,000 for seed-funding to implement their product or idea.

The host of the evening will be Muchaneta Kapfunde. Muchaneta is founding editor-in-chief of FashNerd.com, one of the leading influencers writing about the merger of fashion with technology and wearable technology.

We will continue with a keynote speech from Carla Jusaba, renowned architect who developed her practice in Rio de Janeiro. Her office is responsible for a series of ambitious cultural projects including the ephemeral Pavilion Humanidade 2012 for Rio+20, which was conceived with theatre director Bia Lessa. In 2018, she built one of the Vatican Chapels for the Holy See Pavilion at the Venice Architecture Biennale.

The keynote speech will be followed by the winners’ showcase.

The session will end with the announcement of the 2022 edition of the awards, which will be released under the name “New European Bauhaus Hackathon Winners.”

The speakers were selected through the 2021 EIT Community New European Bauhaus citizen engagement calls and capitalises on existing citizen engagement activities in re-designing the public realm. The selected projects worked with different stakeholder groups to not only prioritise their most pressing challenges but also to co-create well-founded solutions for their communities, including the core values of sustainability, inclusiveness and aesthetics. The EIT Community New European Bauhaus supported 16 projects in 2021, and three of them will showcase their stories in the session.