Climate scientists, ecologists and activists can sometimes dismiss climate art as inaccurate or even useless. Andreco who works both as a scientist and an artist feels different.

“Artwork can change the perception of the environmental problem” he writes, backing the idea that culture is at the heart of system change as it directly influences individual behaviour.

Andreco works as both an environmental engineer and as a visual artist, his art is influenced by scientific research on sustainable resource management, green infrastructure, mitigation, and adaptation.

Working as a scientist and doing research as a visual artist, he decided to overlap the two, developing a method named ‘Nature as Art’.

His pieces frequently moves natural elements into an artificial environment, to change people’s point of view; the perception and conventional meaning of objects. He feels his work is different from other environmental art, as he uses up-to-date scientific research. 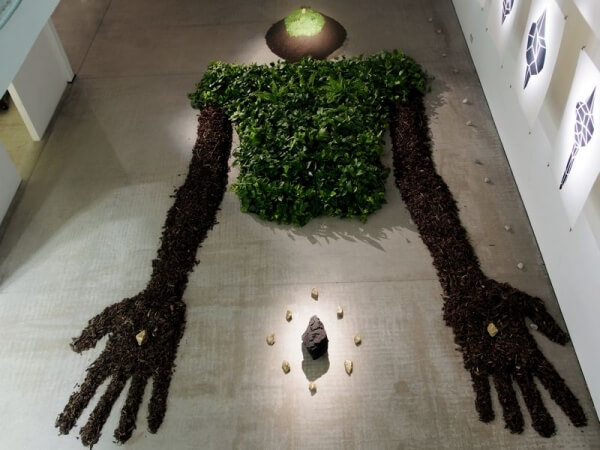 Green Man – A person made from plants that purifies air polluted by people. 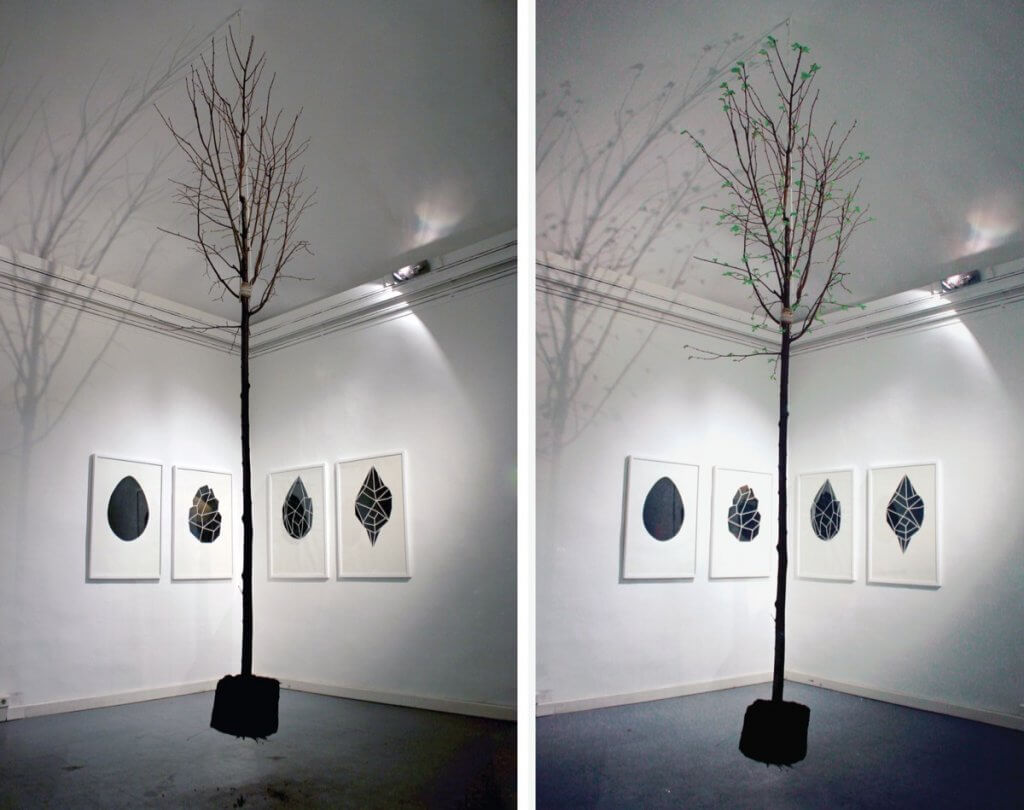 A tree hung from the ceiling 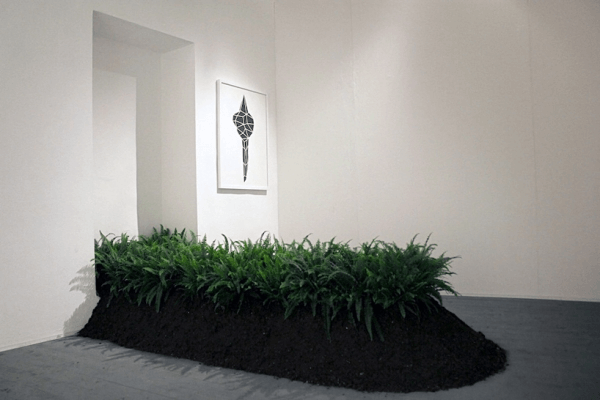 Installation made of ferns showing how they can remove metal pollutants from soil. 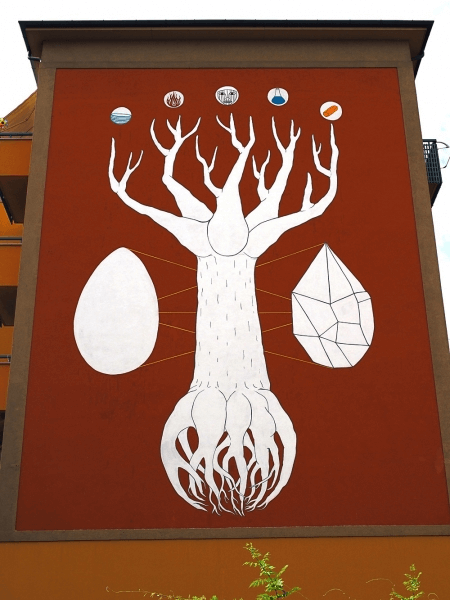 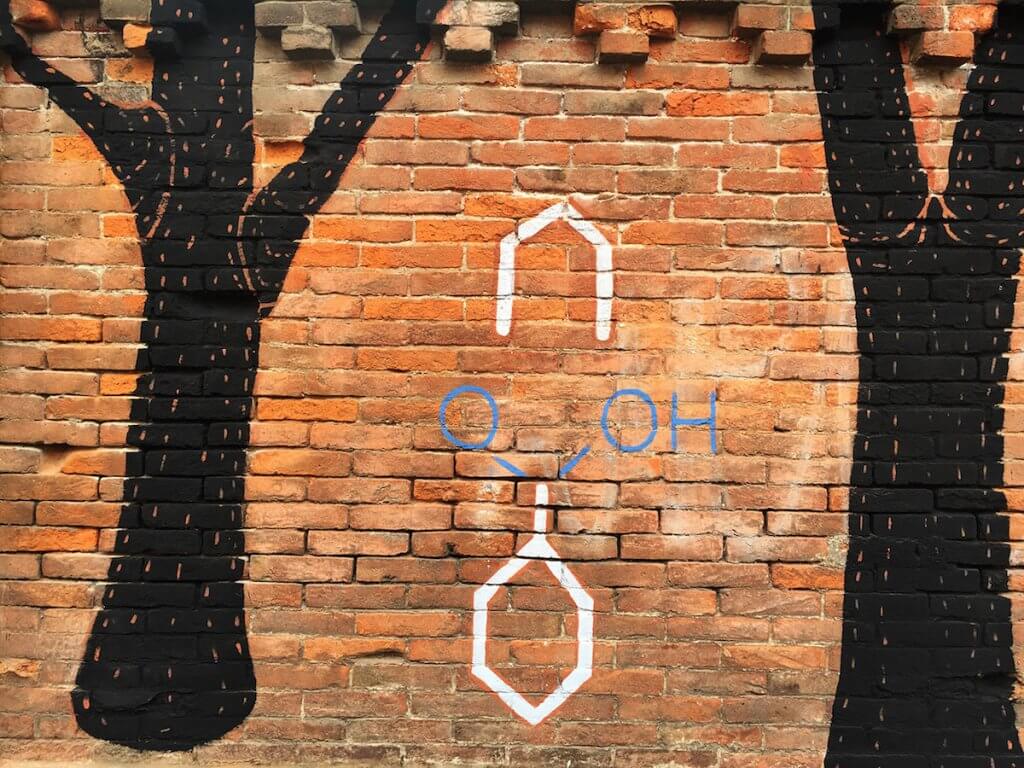 The Climate Art Project was launched in 2015 to promote debate between science, art, philosophy and activism, and explores the causes and consequences of climate change.

Interventions took place in different European cities, each emphasising the weaknesses of the territory where the project took place.

One project in Bari, Italy, highlighted the acceleration of desertification caused by rising temperatures. Another in Bologna focused on air pollutants and greenhouse gases. Venice focused on sea level rise. 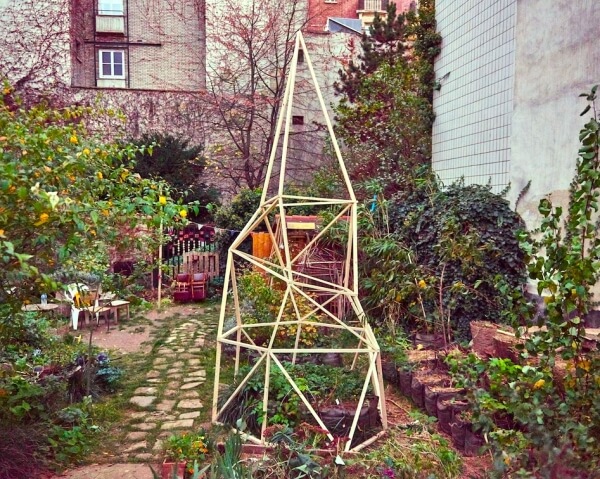 Before the COP21 climate conference, a structure made from wood and climbing plants was installed in a community garden in the host city, Paris, with the help of the local community.

Reflecting on how important green space in cities is for a healthy environment, water and heat management, and good land use planning, Andreco installed a sculpture symbolising protective armour, on a platform used to grow herbs and small vegetables. 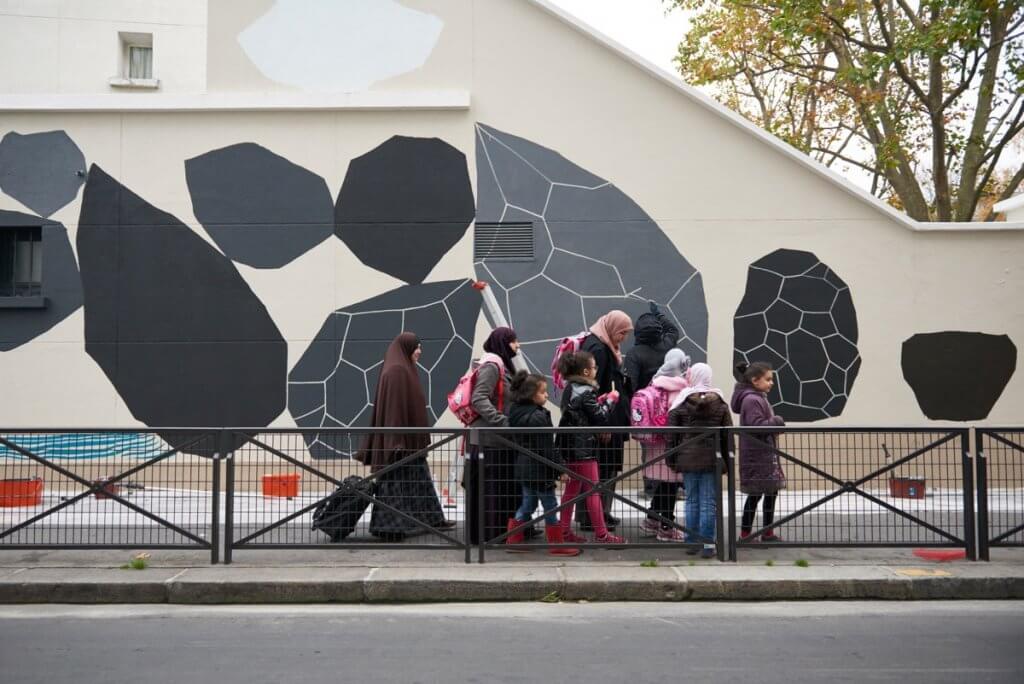 Schoolchildren gather in front of the mural 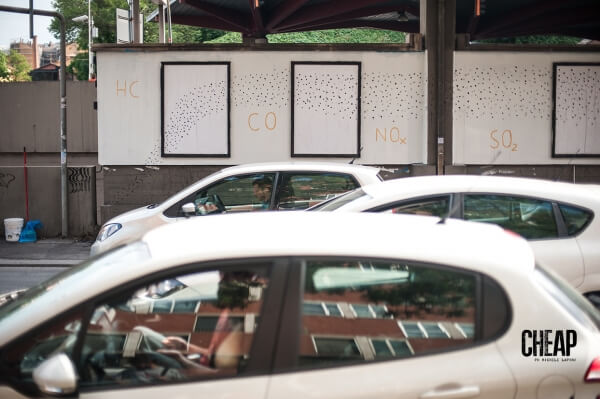 Visualisation of air pollution in one of the most polluted areas of Bologna.

Referencing vehicle emissions as one of the main causes of pollution in cities, Andreco’s next piece was situated at Bologna Bus Station, one of the most congested part of the city.

Further along the wall, there are greenhouse gas and water cycle pollution symbols, as well as graphs highlighting the rise of CO2 in the atmosphere.

Towards the end of the work, a tree branch emerges and catches fire. The final stage is a completely black poster. 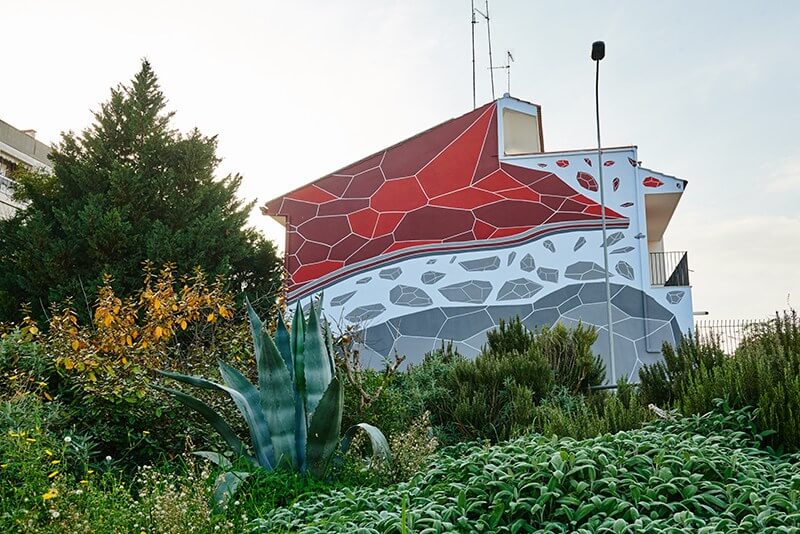 Andreco’s third CLIMATE installation was an wall painting inspired by desertification studies in Bari, Italy, that emphasize environmental and social repercussions in the areas which is at risk of drought and desertification.

The non-uniform collection of shapes (in red and grey to reflect desertification maps) represent the unfair distribution of water resources and the changing pattern of rainfall due to climate change. 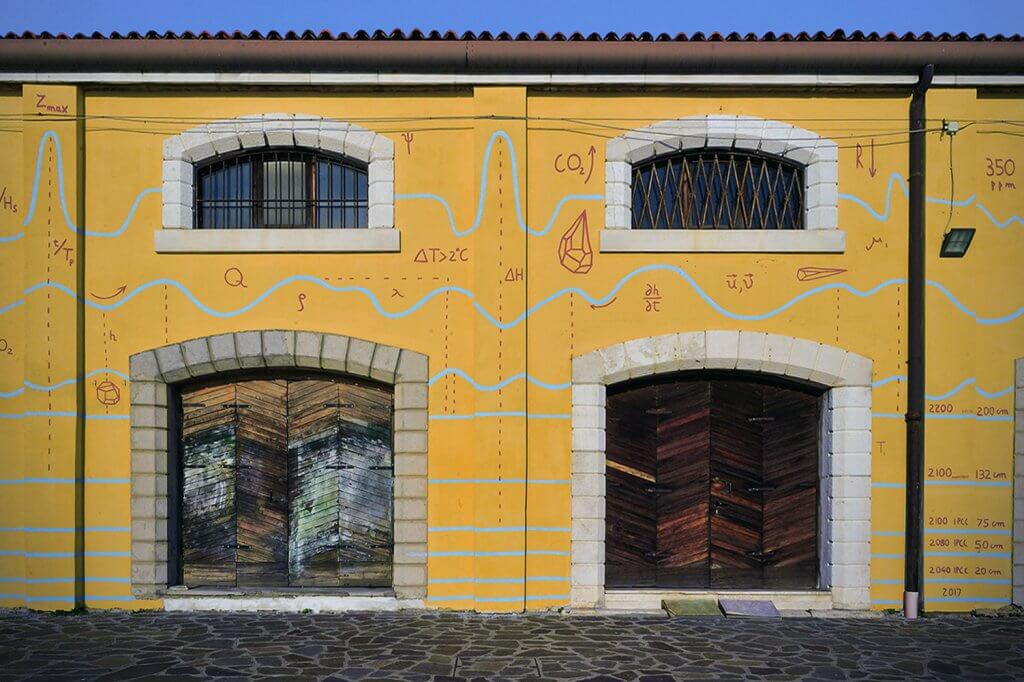 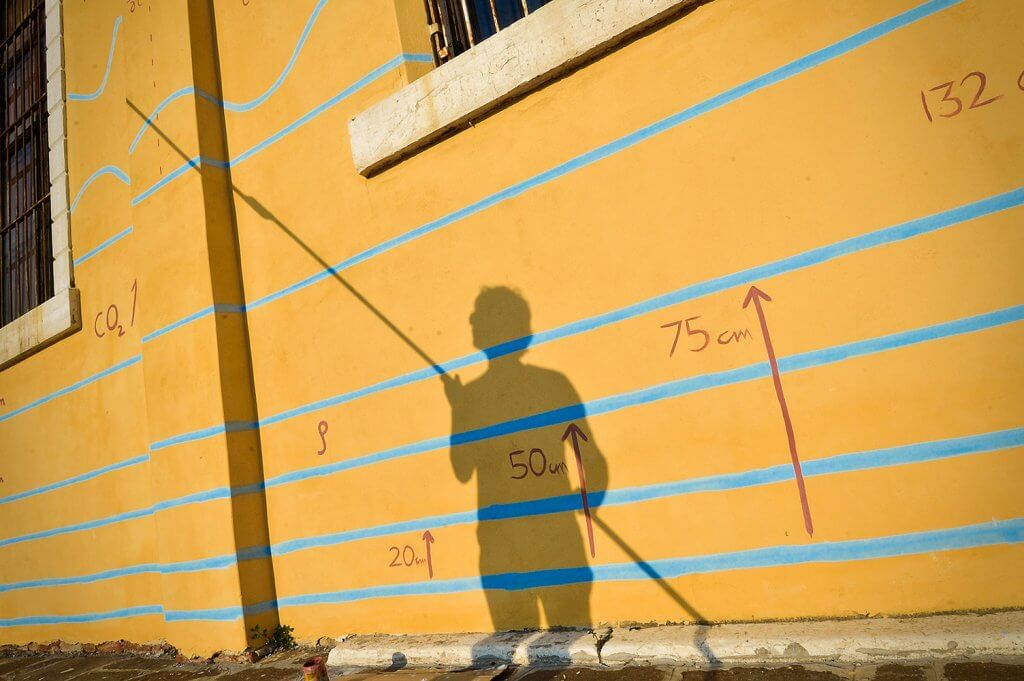 The Venice Art Biennale is hosting the final part of Andreco’s climate work highlighting sea level rise. A 100 meter long wall painting in Venice – a city chosen as most exposed to this kind of risk, visualises local studies on the topic. The installation includes some native plants to highlight how they can benefit Venice in adapting to the issue.

Andreco’s art is hosted in-