Welcome to the Tuesday, 8 November 2016 edition of the Daily Planet’s COP22 live blog!

Drawing on our team on the ground in Marrakesh, social media and press coverage around the world, our digital reporters keep you updated on the latest efforts to accelerate the Paris Agreement’s implementation at the twenty-second UN climate conference in Morocco.

Good morning and welcome to day two of the Daily Planet COP22 Live Blog. Today, I’m reporting live from the Climate Innovation Summit, an official COP22 label event in Frankfurt am Main, Germany. You can follow the events in Frankfurt on Twitter using #CKCIS2016.

I will also be updating you on what’s happening in Marrakesh, Wi-Fi permitting. Got any news or events tips? Don’t hesitate to send them over to us on Twitter via @ClimateKIC or email cop22@climate-kic.org.

“We must build partnerships today for a better tomorrow. Innovations may be the vision of one person, however it often takes many people working together to turn a vision into reality.”

Keynote speech from @PEspinosaC at the Climate Innovation Summit, an official #COP22 side event #CKCIS2016 pic.twitter.com/vrkAzmHQIU

COP22 champion Laurence Tubiana calls for global collaboration on climate change – no government or city can act alone, we must work together.

«We need everyone involved. No government or city can act alone.»- @LaurenceTubiana #GCA #COP22 #ActionTime pic.twitter.com/EYhfA44Uvk

Check out our Flickr account for images of the @UN Climate Change Conference #COP22 in Marrakech https://t.co/32UKJ49bnx pic.twitter.com/8KFY9q50dp

As well as checking out yesterdays live blog, you can also have a look at this Twitter Moment for some COP22 highlights from day one in Marrakesh.

‘We stick to the Paris Agreement’

…I’m taking over the live blog from Toronto, where most hold their breath, like COP22, as America decides on its next president. But France’s chief climate diplomat Laurence Tubiana maintains she is not concerned, according to Reuters.

“I think we should not over-emphasize the importance of Donald Trump,” Tubiana told reporters yesterday. “It would be a shock” if Trump were elected, “But if it happened, on Wednesday morning you would see everyone say ‘We stick to the Paris Agreement’,” she said.

‘Race against time’: Champions speak out against complacency

Tubiana el Haite are in charge of keeping the momentum of the historic accord going among government ministers, senior officials and ‘non-state actors’ around the globe. The world is united in a “race against time,” said Tubiana, while warning against complacency and calling for action now, not just in 2020: “we are lagging behind,” she said.

Along with el Haite, Tubiana emphasised it’s about “action on the ground” and innovation. You can watch a recording of the press conference on the UNFCCC’s streaming portal.

#COP22 climate champion @LaurenceTubiana : All governments need to hear the good news about #ClimateAction on the ground, by cities, biz pic.twitter.com/IX7IlxbDRG

In a statement on the European Commission’s Climate Action website, Cañete says Europe is also ready to meet its targets for 2030: “We have already on the table all the legislation needed to deliver on our target to reduce emissions by at least 40 per cent by 2030,” he says.

Emissions in the EU were reduced by 22 per cent between 1990 and 2015 while the economy grew by 50 per cent over the same period, according to the release. By the end of this year, the EU Commission will also present new legislation to boost renewables and energy savings.

COP22 is “a little nervous” today

The winner is not expected to be declared until after midnight Marrakesh-time, but COP22 delegates are already wondering where to watch the results come in.

Know of a good place? Zack Coleman of the Christian Science Monitor may still be looking.

The mood is somewhat tense today at COP22, and PacificStandard quotes a “veteran European Union negotiator” as putting it like this: “They will vote on whether to elect a man who says he wants to take a hammer, a lead pipe, and a chain saw to” the Paris Agreement, “So, yes, we may be a little nervous.”

Don’t underestimate the power of trees

At the COP22 side event in Frankfurt, Schellnhuber said “Some ideas for removing carbon are great, others are totally whacky,” according to a tweet by ICLEI’s Roman Serdar Mendle. “The best still is planting trees,” he added. 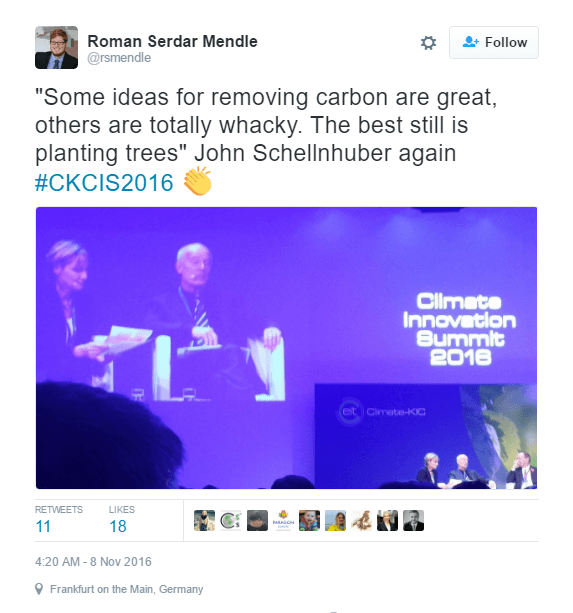 Some very young – but no less brilliant – Toronto-based participants in last week’s global hackathon orgainsed by Climate-KIC to find local climate change solutions might very well agree, since they won a first prize with their tree-based solution to reduce Toronto’s transport emissions by 5 per cent.

The winning team, which included technology enthusiasts Artash (10) and Arushi (7), responded to Toronto’s Climathon challenge by proposing an increase of the Canadian city’s tree population “at street level and in open areas by 300 percent.”

‘It’s been a good year for forests’

One of today’s official themes at the Marrakesh summit is “Forests,” and 2015 was a good year for forest protection, according to WWF’s Josefina Brana-Varela as per a UNFCCC tweet.

Forests are important carbon sinks that play a crucial role in maintaining the world’s ecological balance. Deforestation is responsible to almost 20 per cent of global greenhouse gas emissions.

At #COP22, @WWF's Josefina Brana-Varela says 2015 was a good year for forest protection with new #GlobalGoals and #ParisAgreement pic.twitter.com/xQKFlwxVMu

By combining optical and radar data, in situ measurements and vegetation models, the platform provides forest owners and managers with information about the size and structure of forested areas, including analysis of their evolution over time and carbon stock estimations.

“In Marrakech, for the first time in COP history, the issue of water is at the forefront of the agenda,” the World Water Council’s Loic Fauchon announced today according to a tweet from the COP22 account.

In addition to forests and land degradation, water is one of today’s official themes at the side-events in Marrakesh – although those who stay up to watch the outcome of the US election may move on to something a bit stronger.

"In Marrakech, for the first time in COP history, the issue of water is at the forefront of the agenda," Loic Fauchon, @wwatercouncil pic.twitter.com/jOP4FyYp3h

But while diplomats at COP22 discuss action plans and high-level stragies, European start-up companies are already delivering solutions in Frankfurt today as they pitch as part of Climate-KIC’s #BestClimateVenture contest.

Spain’s teCH4+ is one of the companies to take part and has developed a new solution that sanitises water while creating biogas out of the dirt that it removes.

Good news from Japan today, which was just congratulated via Twitter by the UNFCCC executive secretary with its ratification of the Paris Agreement.

The country was the second largest remaining emitter that still had to formally join the accord, and plans to cut 26 per cent of its greenhouse gas emissions by 2030.

According to the Japan Times, automobile giant Toyota had already set its own target of reducing carbon dioxide emissions from all new vehicles on sale in 2050 by 90 per cent from 2010 levels. The company also plans to further promote hybrid and fuel cell vehicles.

Japans ratification involved a bit of political drama, as the country originally planned to ratify on Friday, in time for the COP22 summit, but the vote got caught up in a debate about a separate matter, according to the Chicago Tribune. But since the first official Paris Agreement meeting will only take place next week, the country’s negotiators might still be in the clear.

Thanks Japan for depositing Instrument of Ratification of #ParisAgreement with the @UN (103rd Party) https://t.co/3BPHXKpniB pic.twitter.com/5kf4rLDS0I

COP22’s first day in under 3 minutes

If you’d like to get an impression of the conference site in Marrakesh, the UNFCCC has a great video for you with some of the first day’s highlights (just don’t doze off because of the soundtrack).

In Frankfurt meanwhile, at the Climate Innovation Summit, a jury has picked Carbon Delta as the winner of Climate-KIC’s #BestClimateVenture contest.

The Zurich-based environmental fintech company, which takes home €80.000, has developed a system that calculates the Climate Change Value at Risk (Climate VaR) for thousands of companies, identifying how much a company’s value is affected by climate change.

Climate action is turning into a “social movement”

“You have physical and biological tipping points (…) but equally you also have social tipping points in the sense that innovations and campaigns can change the world dramatically within the next few decades,” John Schellnhuber said today according to news reports.

Schellnhuber, the renowned German climate scientist and Climate-KIC chairman, made his comments at te Climate Innovation Summit in Frankfurt – the COP22 side-event organised by Climate-KIC.

Schellnhuber, a senior adviser to the German chancellor as well as the European Commission, said “divestment” is his favourite example: “A social movement that says that money must not be invested in damaging business cases can be very important,” environmental news website Edie.net reports.

UNFCCC executive secretary Patricia Espinosa joined the event via video link and echoed Schellnhuber’s beliefs that social campaigning could “ignite” the Paris Agreement into action, according to Edie.net. 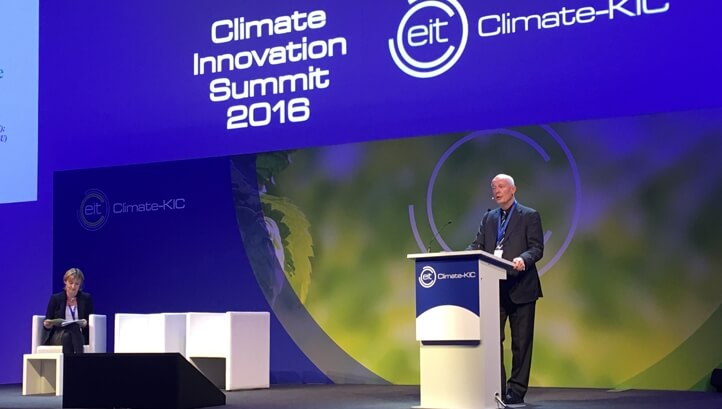 The UNFCCC’s officious “6 o’clock rule” has just kicked in at the Marrakesh conference site (no meetings after 6pm).

Delegates will be turning to networking and perhaps a drink or two to calm their nerves while voting is underway in the US. We’ll wrap up this live blog and will be back with more tomorrow – hopefully with some good news about the next US president’s plans for the low carbon economy.

The flag of almost every country in the world flies in front of the venue of the @UN Climate Change Conference #COP22 in Marrakech pic.twitter.com/PxybE8lwUi